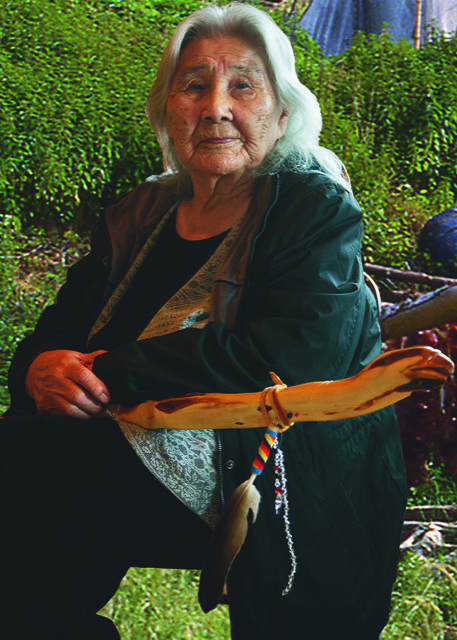 Katie John was born in 1915 in Slana, near Mentasta to Chief Charley Sanford and Sarah, called “Liza.” Katie was born seventeen years after the gold rush “turned the world upside down.” The family’s traditional fish camp was at Batzulnetas (pronounced “Benzuhneetuhz.”) Wage labor was introduced in Katie’s area in 1923 with the opening of the Nabesna gold mine. In 1932, Katie married Fred John Sr. and together, the family rode the transition from subsistence to the cash economy. Katie was, above all, a matriarch, an ever-available mother and grandmother. Steady, always ready to protect another child under her wing, Katie was a mother of six, an adopted mother to twenty-five and a grandmother to 150. Katie sought the Lord early and He steadily protected her and hers.

In 1964 when Katie was fishing in the Slana River, the state government told her to stop so she went to the family’s traditional camp at Batzulnetas, to Tanada Creek on the Copper River, but the state said that side was closed also. She responded, “Oh, yeah?” and she got a lawyer. She fought for access and she won but the state kept appealing. One day, Governor Tony Knowles called Katie. She invited him to her fish camp. She pointed to a little creek and said, “That’s where the fish come up. That’s-a my life. My daddy caught fish there with a trap. That’s where I was raised and where I raised my kids. That’s-a my life.” In 2001, Tony Knowles called and said they’d planned to push it to the high court but we’re not going to do that now.” For her children and their children, Katie won Katie John et al. v. the United States et al,. which recognized her traditional subsistence fishing rights at Batzulnetas, located within the Wrangell-St. Elias National Park. She went to the US Supreme Court and no matter the fallout of state v. federal control of Alaska’s water-ways, Katie safeguarded the rights and cultural heritage of her children. Even more importantly, Katie opened her home from the late 1950s through her death in 2013 to the Lord’s ministry. Today, her children and grandchildren are the church in Mentasta. Katie was a great maternal tree who provided safe haven, roots in Alaska’s land and hands lifted up to God. She was Katie John, Mother to many.