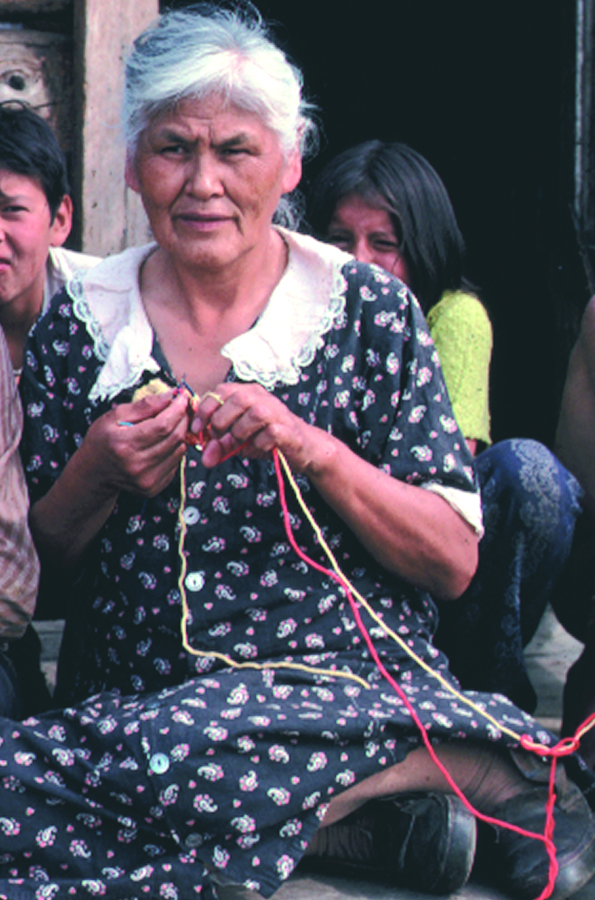 Mary Nehalia Pitka Peters, mother of Emmitt Peters, the Yukon Fox, was an overcomer. She was born in 1915.

Later in life, she dictated the following account of her birth, word for word, to her daughter, Lilli Sweetsir. Nina Marie Dozette, Mary’s granddaughter, forwarded the birth story portion to Judy Ferguson May 31, 2019 to update and add to Mary’s bio. Mary Peters said of her own birth:

A boatload of people stopped off at Sara Pitka’s[editor note: Mother of Madeline Notti, who later became Emil Notti’s mother] fish camp, they [the boatload] were all drunk.  There was a young girl on the boat, she must have been sixteen years old and she was pregnant. Many hours later after the boatload of people left, Sara Pitka found a newborn baby in her smoke house. The baby still had afterbirth all over her. Flies and maggots were all over the baby, in her mouth, nose and around her eyes.

Sara’s daughter Madeline must have been about ten or twelve years old. She really wanted her family to keep the baby, so she begged her mother to do so. Consequently Sara and Paul Pitka kept the infant and named her Mary.

Nina Marie Dozette added, “Mary was biologically related anyway to the Pitkas.  Mary and her Pitka “sisters”, Lucy, Lena, Madeline and Florence were all raised together then as sisters. Mary’s adopted brothers included Timothy, Richard and Albert.  In those days adoption was rare. Children took the last name of the couple who raised them. Mary’s new siblings referred to her as their youngest sister.  Noone referred to her as “adopted”, however the following generations made that reference.

The Pitka family were the descendants of Ivan Pavalof, the Russian-Athabascan, who was the last official manager of the Russian American Company in Nulato. Mary made her home in Ruby with her husband, Paul Peters and their ten children. She was “Old Alaska.” Whether at their town cabin or at their fish camp at Melozi, this warm and open lady always had an open door to children and to visitors. Independent, strong and extremely industrious, Mary was upright and a skilled artisan. When she was sixty, she’d hand tanned 65 moose hides. Her hands were always busy with crocheting, knitting or cooking. Between her son Emmitt and husband, Paul, the family put up untold amounts of smoked and dried salmon for them and for their sled dogs. Mary was a combination of the Statue of Liberty of the Yukon River and an oral history of Alaska’s Yukon River history. She opened her door to me, my husband and our five-year-old son and taught us the ways of the land. Hers was a safe house, a refuge. Mary Peters was a game changer. We are the poorer with her passing in 1992, but much the better for having known her, a very special mother and grandmother to all.

We want to make available a tanned fox pelt in salute to the Yukon Fox, Emmitt, and his wonderful mother and father, notecards of Mary at her fish camp and a copy of Windows to the Land, Vol. Two, which includes the Paul and Mary Peters family.